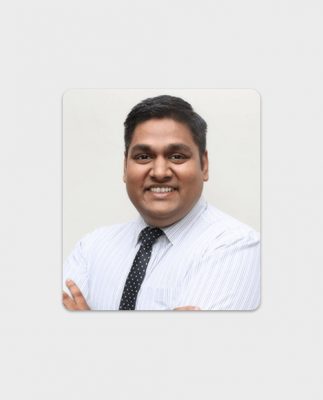 Do you see anything abnormal? Is there something unusual about him?

This is the story of Manu Singh who came to us with a history of trauma to the left eye. He underwent a series of procedures and surgeries and was using up to 6 different eyedrops in his left eye. However, the damage was irreversible and unfortunately that eye lost all vision and soon became a small, shrunken, disfigured eye. Where ever he went, he faced questions about how one of his eyes looked smaller than the other; children would run away, and Manu started avoiding the company of people because of his appearance. Soon, he lost all his confidence and self-esteem.

What condition did he have and what treatment did he undergo?

Manu had a condition called Phthisis bulbi. It is the end-stage ocular response to injury or severe disease of the eye. The chances for recovery of vision are zero and in addition to the stress of having only one, patients of phthisis also face cosmetic issues.

Manu came to us with the hope of having better cosmesis and looking normal once again. He knew that vision could not be salvaged but he hoped to look like everybody else. After a thorough examination and after explaining all the options available, an evisceration surgery was performed. In this method, the jelly-like fluid inside the eye is removed and an orbital implant was placed. An implant gives a spherical shape to the orbital contents and restores the lost volume inside the bony socket.

What is a prosthesis?

A prosthetic eye or artificial eye is usually made of hard, plastic acrylic. The prosthetic eye is shaped like a shell and is customized to ensure perfect fit.

The prosthetic eye fits over an ocular implant. The ocular implant as we mentioned earlier, is a rounded object that is surgically embedded deeper in the socket to impart volume to the bony orbit. An artificial eye or the ocular prosthesis is generally made at least six to eight weeks after surgery. This time is necessary to allow for the swelling to reduce and also to allow the socket to heal.

How is a prosthesis different from a normal eye?

A prosthesis is an artificial eye. It does not bring back the lost vision/eyesight. A prosthetic eye can move, but often as much or as well as your other healthy, normal eye. The small hole in the centre of the dark part of the eye – the pupil in a prosthetic eye does not change shape in response to surrounding brightness. So, it is possible that the pupils of the two eyes may appear unequal in size.

If you or someone in your family can benefit from an ocular prosthesis, consult an oculoplastic surgeon soon.

Case of Mr. Ashutosh, a 36-years old male and a marketing manager at a pharmaceutical company in Panvel. He visited...

Thyroid and your Eye

Thyroid problems can surprisingly affect your eyes – the way they look and also your vision. Learn about the effects...

What happens to our eyelids as we age? As our body grows old, so does our skin. Slowly over a...

What is Ptosis ? Drooping down of the upper eyelids is called ‘Ptosis’ or ‘Blepharoptosis’. The result is that one...